The Mind of a Jewelry Designer in Plymouth MN

This story begins in February of 2004. That’s pretty much the dead of winter in Minnesota. And what do most Minnesotans wish for in February? Escape! Lucky for us jewelry designers the largest gem and mineral show in North America is held every year in Tucson, Arizona, in February! Perfect timing! A gemaholics paradise. You can find everything from quartz crystals to colored diamonds, and everything in between. And I mean everything. Thousands of dealers, cutters, and miners, displaying their passion for all to see and drool over. 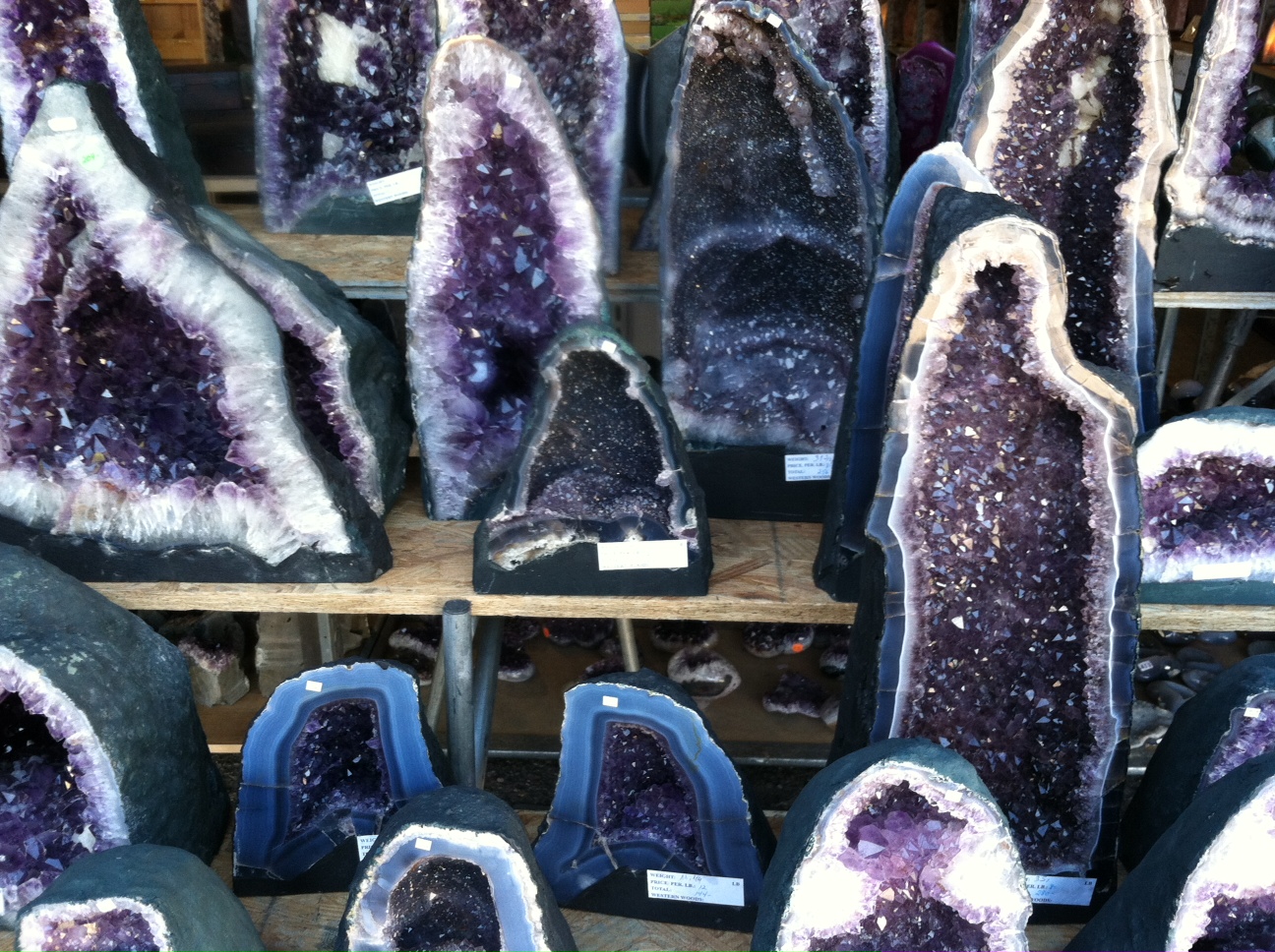 The show with the best gems (in my opinion, which is a little bent toward higher end stones, and by higher end stones I mean superior cutting, full treatment disclosure, and honest dealers) is the AGTA show, which stands for American Gem Trade Association. The members are carefully screened, and must sign a document in which they promise to conduct business in an ethical and honest manner, and fully disclose any treatment to the gems they sell. In other words, No Shadiness. Most of our gem sources we’ve known for at least 20 years, and a few for close to 40 years. But if we want to try someone new, we can trust most everyone at an AGTA show. Of course we still use our gut to decide if we can work with someone or not. Some of these folks are quite strange, and not so trusting themselves.

So let’s get back to 2004. I was on a particular mission to find a gemstone dazzling enough to impress the judges at next year’s Spectrum Design competition. What’s that you say? It’s the most prestigious colored gemstone contest there is, put on by, you guessed it, the AGTA. I used to enter contests regularly, and have done pretty well in most, but I have never won an AGTA award. Of course I have only entered twice in the last 30 years, but I still have a yearning for that award. But it takes special gems to impress the judges, who you might expect have seen a lot of nice stones, so it takes a lot to impress them. Well actually, I have seen a lot of nice gemstones in my life, so it takes a lot to impress me!

When we are shopping for gemstones we really need for the gem to speak to us. My design inspiration comes from the gem, and if it only whispers, then the design will only whisper. But if it speaks loudly, or yells, well, you get the idea. It’s difficult to make a bad design with a killer stone. But keep in mind that, at the AGTA show, there are hundreds of gemstone dealers. And they collectively are showing hundreds of thousands of gemstones of all sizes, types, and cuts. Not all of them are spectacular, and you have to look at a lot of them to find the right one. And. There. Are. A. Lot! So you need to have a system, because the best gems sell first. 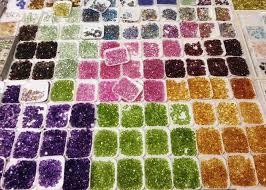 Everyone has their favorite gem dealers and cutters, and the minute the show opens they make a beeline to see their latest offerings. When we exhibited at the show, we had a few regulars that would come first thing, and scoop up our show pieces. Our show pieces were usually made with our favorite gems, and were only completed a day or two before we left for the show. And they were taken away on the first day of a six day show! We barely got to know them! But now we were the shoppers, and we needed to find something special. So instead of doing what most people do, which is start from the front, we went straight to the back. Because that’s what we do. When everyone else zigs, we zag. 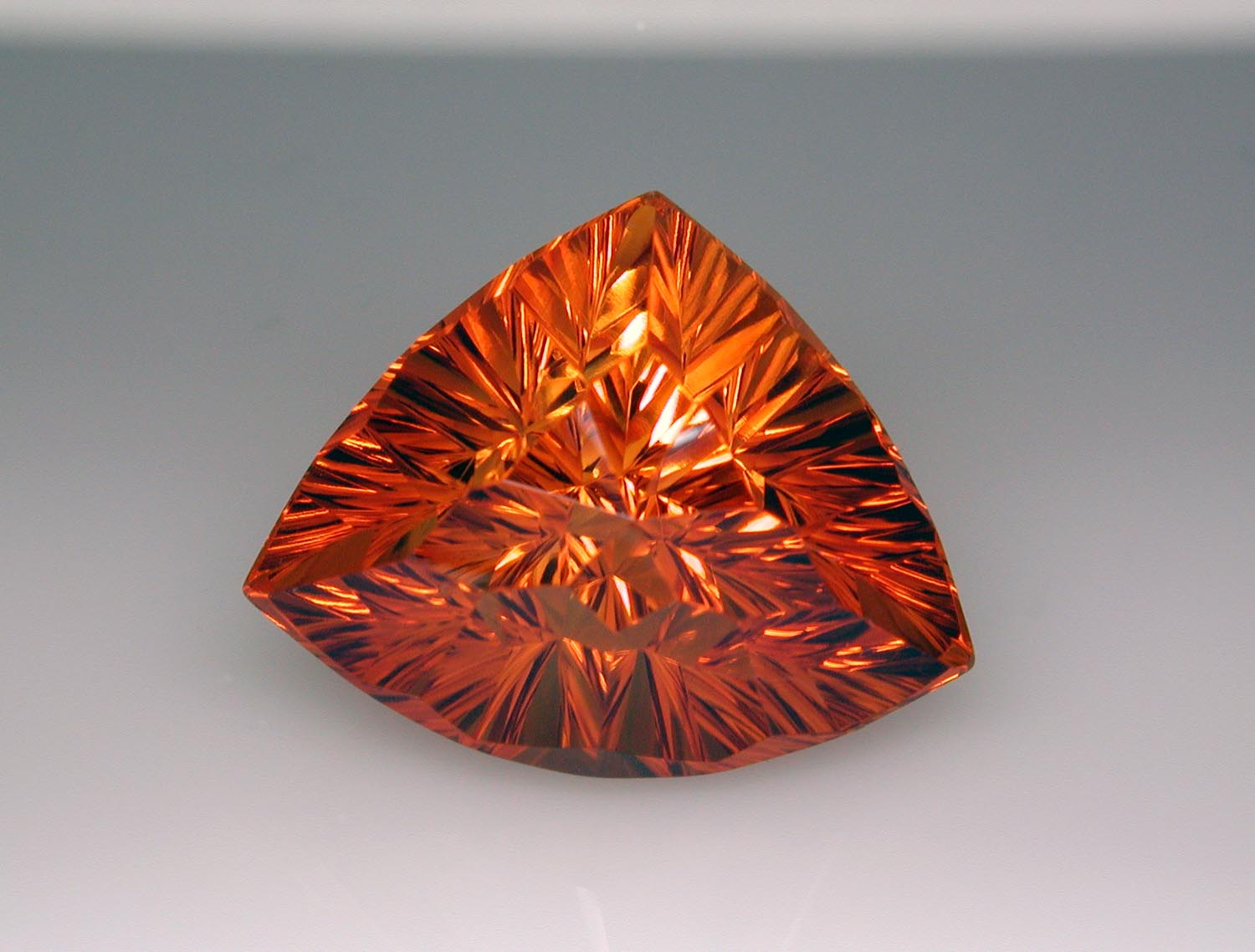 And wouldn’t you know it, way in the back row, there was one of our favorite American gem cutters, Mark Gronlund. We had previously only admired his work, and always thought he was too expensive for us. Well not anymore! He did have some very expensive gems, but he also had some very reasonably priced gems, like a gorgeous Madeira Citrine. He developed a special cut for this stone, which he calls a Triangular Cushion Concave Starburst. (Breathe!) We just call it Spectacular! Because of this cutting, the stone seems to glow from within. There are no windows (dead spots you can see through), and no bad angles. The gem literally looks like it has a fire inside it. Sold! I don’t know what I will make yet, but this gemstone will make it sing! Time to start sketching…!