The Mind of a Jewelry Designer in Plymouth MN Part 3

2011 is here, so better start thinking seriously about what to make for “the” Citrine. Okay, the entry fee for the Spectrum Design Contest was too much to handle, so instead of making the amazing Citrine into a contest design, I’ll just make it into an amazing jewelry design! Yeah! Just as soon as I am not so busy. And I come up with a cool design. Because it has to be cool, right?

July comes, 2012, and ‘R’ comes in to look for some new earrings. She mentions that she has a big Birthday and Anniversary soon, and would maybe like a nice pendant. So out come the gemstones! Keeping in mind that we are gemaholics, there are many fabulous gems to see. She is ooing and aahing all over the place. And then “the” Citrine comes out. It’s love at first sight! She asks if we will hold it for her, until she can bring in her husband and start the design process. Sure! Her name and the date go on the box, and back into the safe for safe keeping!

I don’t know when the big occasions are, but in my mind they are coming up soon. So instead of trying to make an amazing design, and coming up with nothing, I decide to go the other way. I’ve got this amazing gemstone! It speaks for itself, and sparkles like nothing else! Why am I trying to complicate things by over designing!? Let’s just keep it real simple, frame it with diamonds, put it on a nice gold chain, and let the stone do what it does, shine! Great idea! I make a simple sketch so I will remember what I was thinking, just in case it is a few months until she comes back in with her husband. 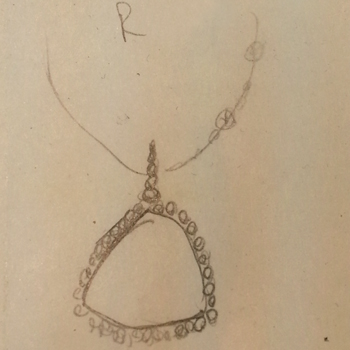 A few months goes by, and then another few, and then another few, and a few more, and a few more after that. Etcetera. Until April. 2015! Wow! I had no idea that much time went by! So let’s recap a little. We bought an exquisitely cut Citrine in February 2004, and we are just now starting to design a piece of jewelry around it, in 2015. And sometimes that is how it works. The special gems will wait a long time for the right design, or the right person. In this case, the Citrine waited for, and found, the right person. The person it wanted to be worn by, that it was destined for.

Well it turns out that ‘R’ has a pretty conservative style, and taste to match. However, she does want something dressy, that she can wear to formal occasions. How about just framing it in diamonds, and hanging it on an interesting chain? I can make a simple basket for the Citrine to sit in, with intricate cutouts, and maybe a personalized back plate. I have an idea for the back plate, but I will keep that as a surprise. I’ll have to ask her husband how he would like to personalize it, and I will put that on a cover plate that will be the back of the pendant. Now I am getting excited! 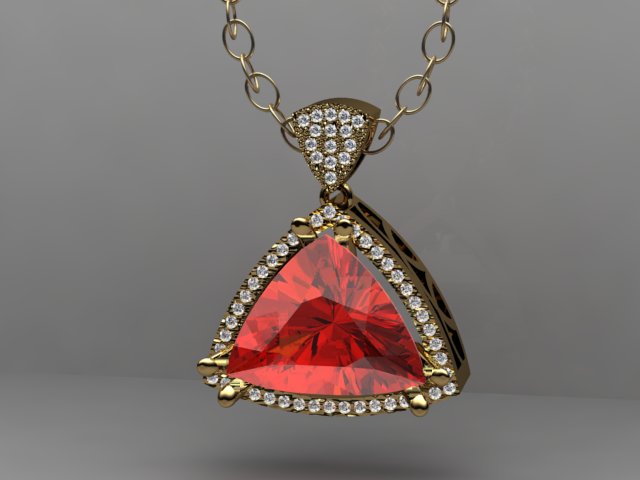 The process starts with a CAD rendering. I make up some designs using some fancy computer aided design software. Which is how I draw, since my artist ancestors somehow forgot to pass along the drawing gene. Luckily, though, I did get a strong sculpting gene. So thanks to CAD software, I can draw! I can draw up as many variations of my idea as I like. A lot of times, I will think of new ideas in the process. But more often than not, the first idea is usually the one that is chosen. 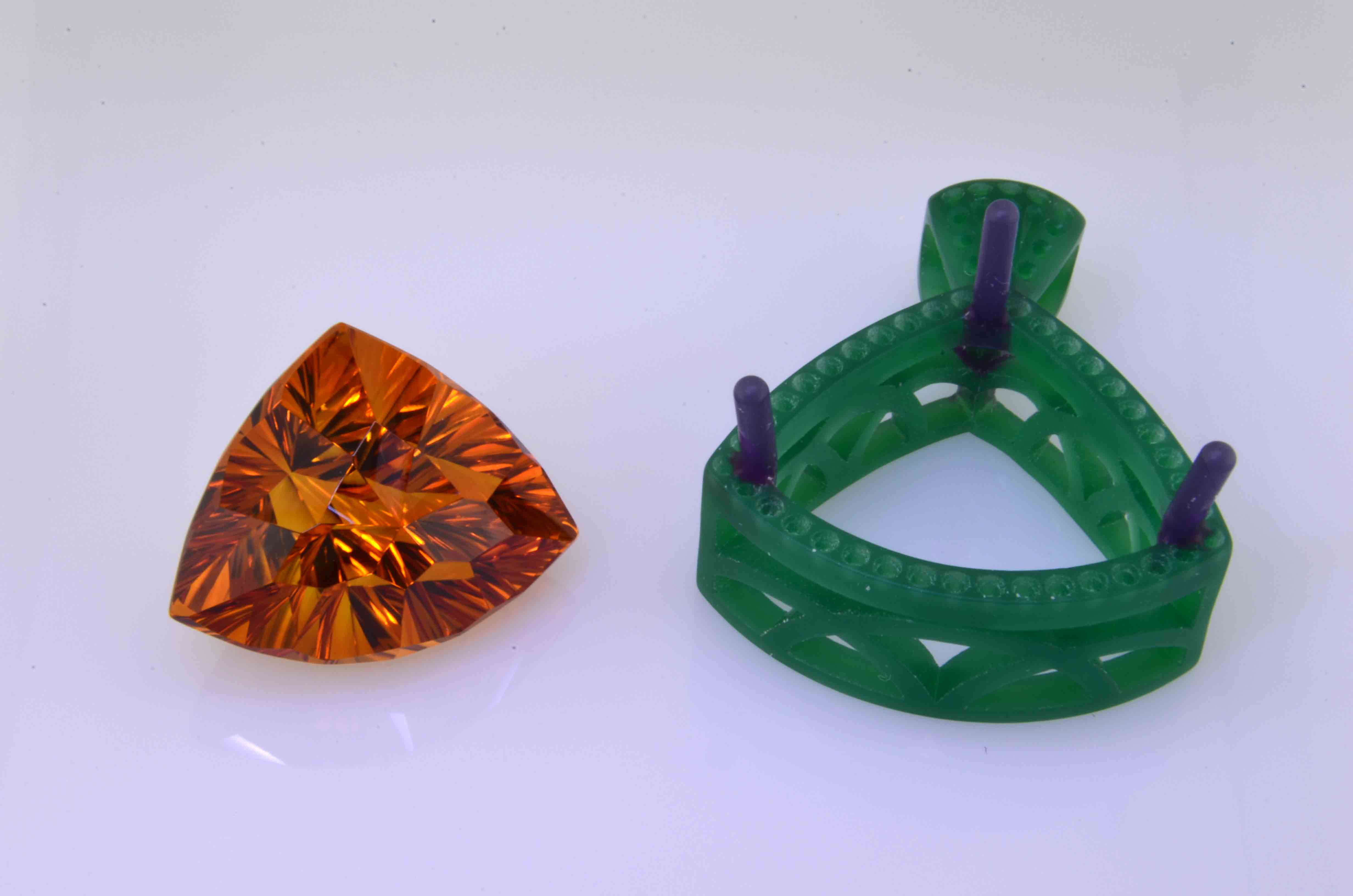 When ‘R’ approved the design, I had a secret meeting with her husband to find out what he wanted to add for personalization. This was to be a 30th wedding anniversary, and 60th Birthday present, so 30 and 60 needed to be included. Of course he also wanted to say ‘With all my love – Tony’. Now I just needed to put it all together in an attractive way. After thinking about it for a couple of days, I wasn’t really getting anywhere, until one morning very early. I woke up around 3, and somewhere between being asleep and almost awake, the picture formed in my mind. Now all I had to do was remember it for a few hours until I actually woke up all the way. As soon as I got up I made a quick sketch! Making this personalized back plate meant some tricky construction, especially since the shape of the pendant was triangular, and it needed to be attached prior to setting the Citrine. But the challenges drive me to be more creative and inventive, which in turn makes the project more fun and satisfying when I conquer all the obstacles. 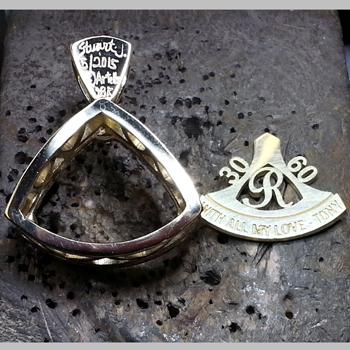 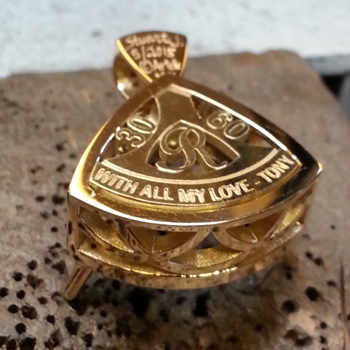 After the design is agreed upon, the process is pretty straight forward. Although sometimes I have to really think about the order of the steps. And this project was extra special, so I made sure of every step. And thankfully, I had plenty of time to complete this special jewel. Which is also nice, because although I (and jewelers in general) need to have a deadline, I don’t like to be rushed. And here are the specs – A little over half an ounce of 18 karat yellow gold; Fifty three ideal cut diamonds weighing half a carat; and one spectacularly amazing triangular cushion concave starburst natural citrine, weighing 16.93 carats. It hangs on a very stylish 18 karat yellow gold link chain, around the neck of a very happy lady, who waited a very long time for just the right Gem! 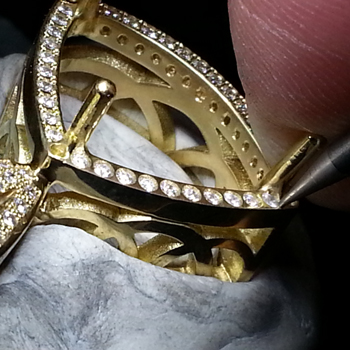 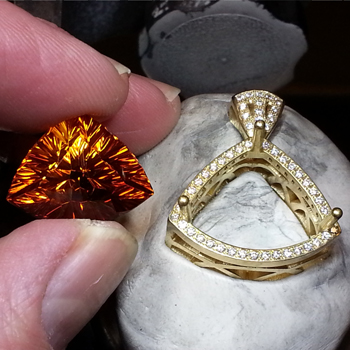 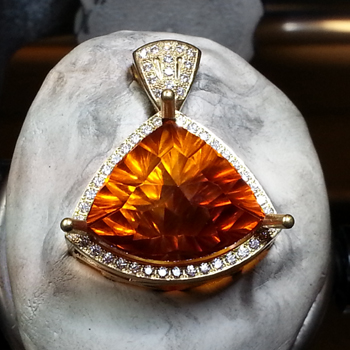 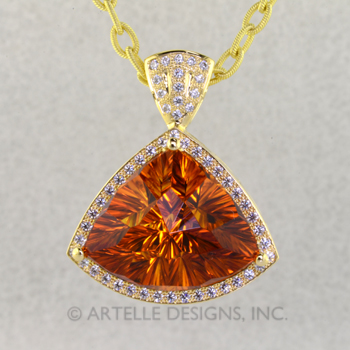 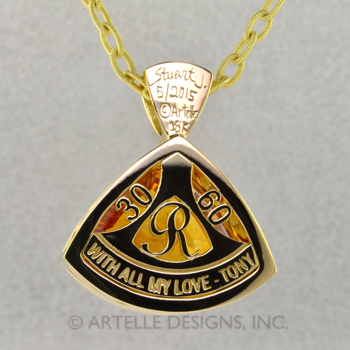 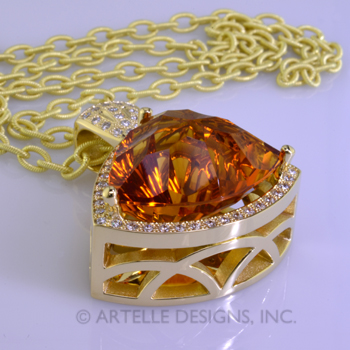